The Blue Zones – secrets to a long and healthy life

Blue Zones are 5 regions of the world where people live long and healthy lives, with a large percentage of people living into their 90’s or even 100’s. They are:

For more than a decade, author Dan Buettner, with the help of the National Geographic Society, has been working to understand what makes some people live to a ripe old age with little ill health. Not only do the populations in the Blue Zones live longer but they live healthier, with low rates of chronic disease such as diabetes and heart disease, and remain active well into old age.

While genetics somewhat determine our lifespan and susceptibility to disease, our lifestyle probably has a greater impact. The researchers found that, despite the geographical and cultural differences, the Blue Zones areas had nine key lifestyle habits in common which they refer to as the ‘Power 9’: 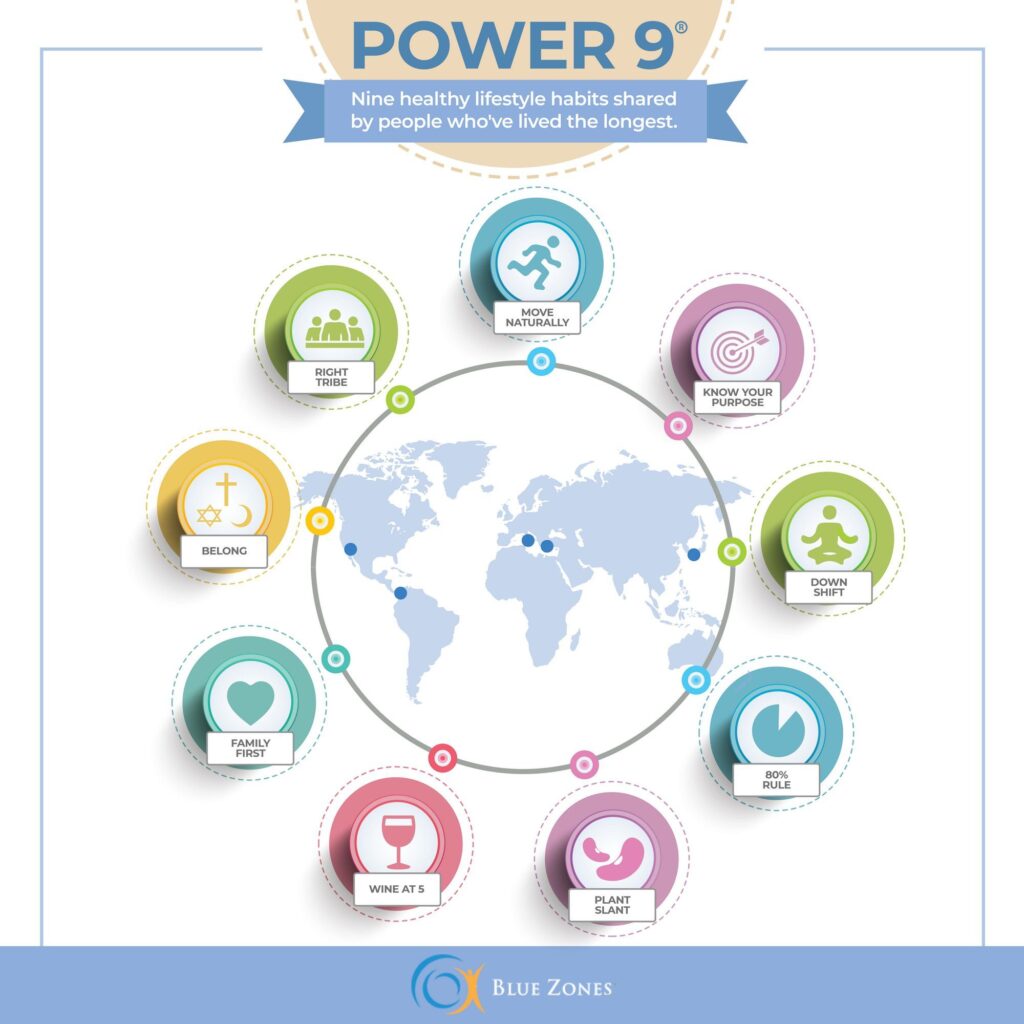 When most people think about getting physically active, the gym immediately comes to mind. However, none of the elderly living in the Blue Zones ever visit the gym. Instead, they live a life that incorporates natural movement and exercise without them thinking about it. Moving naturally throughout the day — walking, gardening, doing housework — is a core part of the Blue Zones lifestyle.  Studies have shown that people who do the recommended of exercise and 20% lower risk of death than those who did no physical activity.

Having a sense of purpose in life is closely intertwined with happiness. The connection between the mind and health is powerful. We all need a reason to get up in the morning. The Okinawans call it ‘ikigai’ and the Nicoyans call it ‘plan de vida’. Knowing why you wake up in the morning makes you healthier, happier, and may add up to seven years of extra life expectancy.

Stress increases inflammation which is associated with many age-related diseases. The elderly populations in the Blue Zones still experience stress, however they have stress-relieving rituals built into their daily routines. Meditating, feeling grateful, praying and midday naps are all lifestyle choices employed by these communities that help reduce their stress. For example, people in Okinawa take time every day to remember their ancestors, Seventh Day Adventists in Loma Linda often pray and Ikarians take frequent naps. Try making a list of activities that you enjoy such as a long walk, a phone call with a friend or meditation. Making time for these activities can help fend off stress before it starts.

People in Blue Zones areas stop eating when their stomachs are 80% full and eat their smallest meal in the early evening. Because of this, it is harder to consume too many calories which leads to weight gain, obesity and other chronic diseases. Long-term calorie restriction may help longevity. A large study in monkeys found that eating 30% fewer calories than normal led to a significantly longer life. In humans, a recent study showed that moderate calorie restriction significantly reduced multiple risk factors for heart disease in healthy weight adults.

One thing common to the Blue zones is that those who live there consume a diet rich in plant-based protein. Meat tends to be eaten in small portions around 5 times a month. Beans are the cornerstone of most centenarian diets. They also eat a lot of vegetables, fruit and wholegrains. Many recent studies have shown that cutting back on animal protein can significantly reduce the risk of death from heart disease and cancer.

Moderate consumption of wine with friends and/or food is part of the Blue Zones lifestyle. In the Ikarian and Sardinian Blue Zones, red wine is the drink of choice, with many people consuming 1-2 glasses per day. Research suggests that this may reduce mortality, specifically from heart disease.

A sense of family and community is important in all Blue Zones communities. For example, being part of a faith-based community may add up to 14 years to life expectancy. Researchers speculate that this could be due to social support and reduced rates of depression.

Having close and strong family connections (with spouses, parents, grandparents, and grandchildren) is common with Blue Zones centenarians. Not only do younger generations value older generations, but they often live together and help care for older family members.

Loneliness can have serious health affects, including increasing inflammation which can contribute to heart disease, diabetes and dementia. It is no surprise then that the communities with the largest population of longest lived people have close friends and strong social networks. In Okinawa, the term “moais” refers to a small social group of friends established during childhood and maintained throughout a person’s life. Forging deep and satisfying long-term relationships is core feature of the blue zone in lifestyle and research has linked this to good health, happiness and longevity.

Researchers found that longevity and health are mainly dictated by our lifestyle rather than our genes. We can learn a lot from the way of life in the Blue Zones. Eating a mainly plant-based diet, keeping physically active and maintaining good family and social networks can increase our chances of not just living longer, but doing so in good health.